Starting in Zurich in June, #Meetingtrophy takes us to Interlaken and finally Thun via Brunnen, Andermatt, the Grimsel and Furka Passes. Getting there is the event for 120 guests. 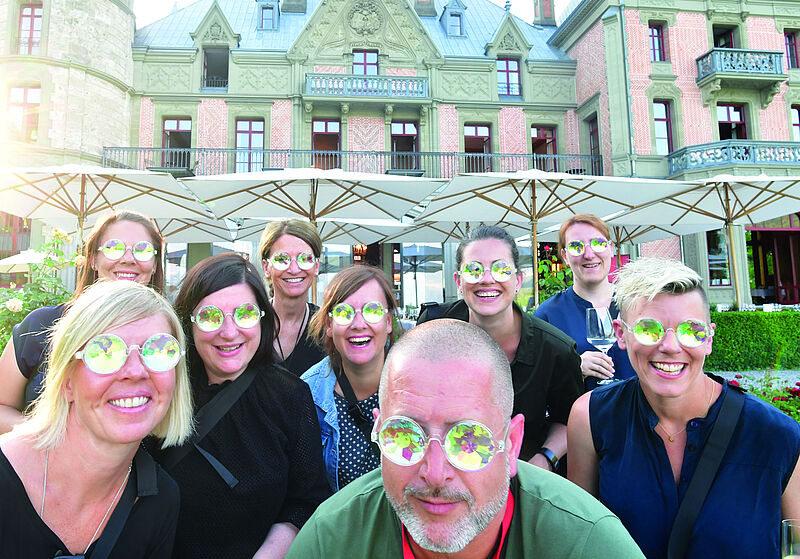 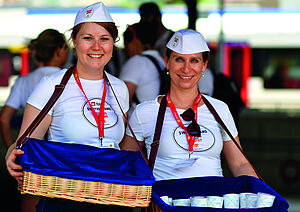 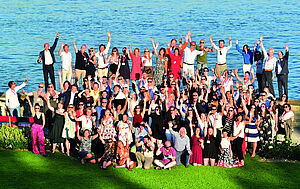 #MeetinSwitzerland. A vet stands with five farmers on a site where each farmer has five stables with five cows, each of which has five calves. How many legs is that in total? If you then add up the four digits of the result, which number do you get to open the combination lock?” While chatting, the travellers can feast their eyes on many lakes, some of them bluish, some turquoise, some surrounded by mountains. Eight national teams are travelling through Switzerland, accompanied by the marketing staff of Switzerland Incentive and Convention Bureau (SCIB).

On the to-do list of the annual fam trip: a catalogue of questions on (meetings in) Switzerland, stops with tasks, active networking and intensive experiences. “Switzerland is a small country, but we have so much to offer,” says SCIB boss Barbra Steuri-Albrecht. “So we can interactively show planners the wide range of options in a brief space of time in a way that will thrill and enable them to better present these ideas to their clients.”

The Trophy was supposed to be a one-off event, but then it was so successful that SCIB is staging it for the 15th time in 2019. Its success is based on “a stringent and detailed programme, the atmosphere, the playful approach, spectacular countryside and active get-together with agency colleagues from all over the world,” recaps Helena Videtic, SCIB Manager Germany and Austria. Add to this the “Swiss Travel Pass” for unlimited mobility and the great joy of all partners – including venues, hotels and agencies – in creating a moving (Swiss) experience. Quite casually, the 120 guests get to know the Swiss mentality, lingo, infrastructure and news. Zurich, for example, looks forward to The Circle centre, a new venue at the airport with plenty of function space and 500 rooms, as well as the opening of the renovated Congress Centre on Lake Zurich in March 2020.

Although not new, it is little known that the Swiss pharmaceutical researcher Albert Hofmann discovered LSD in the laboratory of Sandoz Basel. Some 76 years later, this is the perfect, colourful motto for Team Germany. Even without drugs and a trophy in the end, the atmosphere is and remains perfect. “I would like to get to know beautiful Switzerland and am particularly interested in the great venues that we will, if possible, also sell to our customers,” Charlie Grempels of Künzelsau-based Marbet describes his motives for taking part.

And one of the venues arrives as a special transport: The 80-year-old Churchill double red arrow train takes the group to Brunnen in central Switzerland. En route, they enjoy welcome drinks, lunch, dessert and stunning views of Lake Zug, among other sights. The journey continues by coach to Andermatt. Sadly, staying at The Chedi has to remain a dream. But the Radisson Blu Hotel Reuss, opened last December, offers fantastic views and 244 cosy rooms. In addition, 120 bikes are waiting for the teams. On the agenda: three Meetingtrophy tasks, followed by an evening in a mountain restaurant at Nätschen. Its terrace can be reached by road or the “Gütsch-Express” cable car.

When preparing the trophy, the SCIB team and partner Swiss Travel System attach great importance to showcasing how easily and reliably you can get around Switzerland. Ten different means of transport are used in total. Mountain bikes and cars are driven by the participants themselves.

Via the Furka Pass and Grimsel Pass, guests head to Congress Center Kursaal Interlaken in 30 Europcar vehicles. Barbra Albrecht also gives them adequate tasks by audio message: So, how many legs are there on this imaginary site? The participants rack their brains. A lot of group photos are taken but without earning extra points. There’s a brief stop at Hotel Naturresort Handeck for refreshments and, of course, another task. The road to victory is to be completed with lots of fun, acquiring knowledge in a playful way.

In the Kursaal park guests enjoy a hearty lunch (zmittag) in the shade. After a stone throwing contest and group photo against the backdrop of the imposing Jungfrau mountain, it’s time for a site inspection. The centre is an exciting mix of historical and modern. It‘s a ten-minute walk from the station, as the group discovers by timer on their way to the SBB train to Thun.

The route from Interlaken to Thun follows the shoreline of Lake Thun, which is radiantly turquoise and looks very refreshing. Guests have half an hour to relax and study questions. The historical town in the Bernese Oberland with its 12th century castle is the setting for the Trophy’s finale. The teams give their best before moving into Congress Hotel See­park by the lake with views of the Eiger, Mönch and Jungfrau as well as Hotel Eden Spiez.

For the grand finale, the SCIB team has chosen the recently reopened gem Schloss Schadau. Also by the lake, the boutique hotel with nine lovingly restored rooms is just a four-minute walk from Hotel Seepark. The winning team is elected after three days of intense experiences with colleagues from all over the world, with views of the mountains and fine Swiss cuisine. Urs Eberhard, Deputy CEO of Switzerland Tourism, announces to ear-splitting cheers: Scandinavia!

“Congratulations to the Nordics Team on their victory and also a huge compliment to my highly motivated Team Germany,” emphasises Videtic. “In 2019 we took example of Berthold Brecht: ‘He who fights can lose; he who doesn’t fight has already lost.’”

The #Meetingtrophy is also well documented as a story saved in two highlights on www.instagram.com/cimeurope. There you will also find the correct answer to the number of legs and the solution of the task (no, it isn’t 42!).