Our job is to advocate

Associations are the mouthpiece of a significant civic voice. The UIA Round Table made it clear that their continued relevance depends on how they implement sustainability goals. 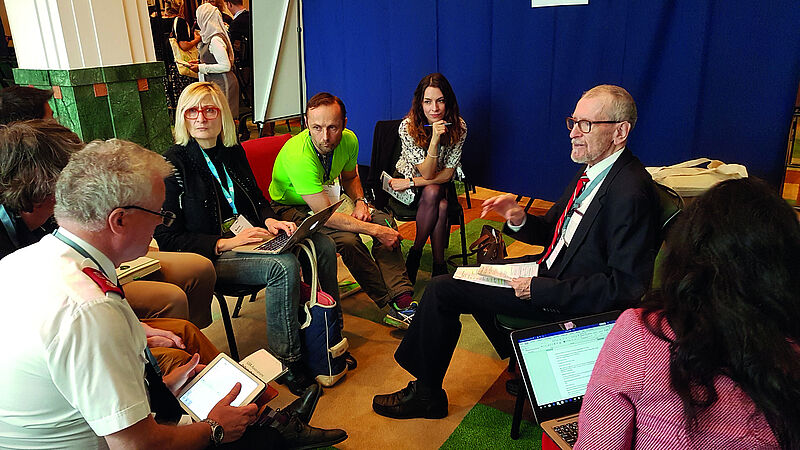 Brussels. The 13th UIA Round Table Europe on 4 November 2019 at the Hotel Crown Plaza in Brussels attracted 219 delegates representing 150 associations from 32 countries. 32 experts spoke on the latest issues of relevance to associations. In his opening address, Cyril Ritchie, president of the Union of International Associations (UIA), laid emphasis on the ethical standards that make associations defenders of civic values. In contrast to political parties, they seek not to win elections and power but to stand up for civil rights in the name of humanity.

The workshops held in ten partitioned-off niches of the large ballroom were a new feature this year, a response from Nancy Carfrae, the coordinator of the UIA Round Table, to high demand from the associations for information on legal issues. A total of six lawyers answered questions on value-added tax and the new Belgian Code on Companies and Associations.

Numerous workshops attested to the importance of sustainability and implementing the UN’s 17 sustainable development goals (SDGs) and their associated 169 targets. Paula Byrne and Joanna Houston ran a CSR Europe Masterclass with practical case studies and exercises designed to ascertain which high-priority sustainability goals can be implemented in a given association. Melanie Delapanche, who calls herself a “sustainability addict”, explained in her seminar how associations can inspire and persuade their members with their commitment to sustainability.

“The sustainability goals are the greatest and most extraordinary opportunity we have to work together in a new way and create the kind of world we need. It’s is a very different world from the one we have,” said UIA president Ritchie, outlining the extent of the challenge. His workshop on the procedure for gaining UN accreditation through the UN EcoSoc platform was an eye-opener for the association representatives. The benefits of gaining the moral authority of UN accreditation are worth the wait of two years, according to Ritchie.

In addition to the knowledge they acquired in the workshops, the participants also learned of the strength and extent of the UIA network. “72,488 profiles of international associations are currently listed with the UIA. 1,500 to 2,000 new ones are added each year,” explained web and database developer Ryan Brubaker.

The current (June 2019) issue of the annual International Meetings Statistics Report, which, unlike the ICCA statistics, also lists non-rotating conventions, indicates that meetings were half a day shorter on average than in the previous year. “Asian cities feature prominently in the rankings. Singapore, Seoul and Tokyo are among the ten most popular cities for meetings,” said Nancy Carfrae.