The 45th EBMT Annual Meeting took place in Frankfurt from 24 to 27 March. It was the result of close cooperation between the city, the venue and the scientific community. 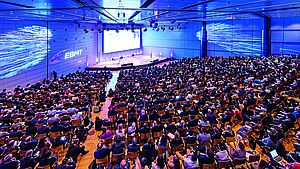 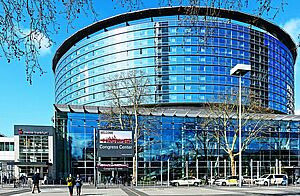 Success. The Annual Meeting of the European Society for Blood and Marrow Transplantation (EBMT) is the world’s largest convention for stem-cell therapy. Messe Frankfurt, the Frankfurt Convention Bureau (FCB) and the Congress Ambassadors Prof Dr Thomas Klingebiel and Prof Dr Peter Bader, both of Frankfurt’s university hospital, combined to bring the rotating European event to the city.

“We worked together fantastically well, and that’s ultimately what enabled us to prevail against the competition,” says Prof Dr Bader, president of the EBMT 2019 Annual Meeting. He has been involved in the EBMT for a long time and believes that was an important factor in the bid process.

The EBMT opened the bidding for 2019 in June 2015. After an initial positive response to his declaration of interest, Bader submitted the official application. The presentation followed during the EBMT Board Meeting in January 2016 in Barcelona. There the two congress ambassadors and their colleague Prof Evelyn Ullrich, the former Director of Congress Frankfurt Claudia Delius-Fisher and FCB boss Jutta Heinrich prevailed against two strong competitors.

In the final step, the board negotiated hard over prices and support from the city. The city authorities agreed to support the networking event at the Gesellschaftshaus Palmengarten and take on hotel reservations for delegates. “The contract was then awarded,” reports Jutta Heinrich. “We were delighted.”

More than 500 stem-cell transplantation centres in over 60 countries are members of the EBMT. The Annual Meeting provides a platform for an exchange about the latest developments in stem-cell transplantation and cell therapy. With over 5,500 delegates from 91 countries, Frankfurt set a new record. A total of 1,068 abstracts were submitted, and 207 scientific papers were presented. The industry exhibition allowed 66 companies to showcase what they have to offer. Accompanying events such as the networking evening, award ceremonies and the welcome reception in the Saal Harmonie completed the programme.

A medical convention of this size imposes significant demands on the host venue. “What makes the Annual Meeting special is that it consists of a number of conventions running in parallel,” explain the EBMT’s Executive Director Andreu Gusi and Operations Coordinator Bora Çelikel. A venue has to be found that can meet this challenge in terms of both coordination and the rooms required.

In addition to breakout rooms for presentations, space is required for poster and industry exhibitions. With the combination of the Forum Messe Frankfurt, Congress Center and Hall 5 as well as flexible rooms and partitioning, the trade fair centre was able to meet all requirements. The other prerequisites for the event were a central location, ease of access and sufficient hotel room availability nearby.

“The venue’s city-centre location and the many hotels in the vicinity made it easier for us to organise the event,” say Andreu Gusi and Bora Çelikel. All the services, from catering to technology, security, hostesses and room and exhibition stand construction, were provided and coordinated by Messe Frankfurt. Exhibitors were able to order services directly from Messe Frankfurt’s online shop.

The packed programme of presentations represented a logistical challenge of a very particular kind. Rapid alterations often had to be made. From Monday to Tuesday the posters on 460 poster walls in the Saal Areal had to be replaced to reflect changes of content. Everything went smoothly, thanks to the efficiency of the service team. Three Messe Frankfurt project managers were in place in each of the buildings, and 20 people handled all the cleaning, rebuilding, furnishing and signage.

The tightly scheduled programme didn’t leave much time for eating. The caterer Accente Gastronomy Service provided meals quickly in take-away lunch boxes. This was an approach that worked well, reports Romina Gowin-Becker, the new Director of Congress Frankfurt. “In future we want to further develop the concept with Accente, in particular with a view to reducing the volume of waste from packaging.”

For Messe Frankfurt, the Convention Bureau and the congress ambassadors, the three-year acquisition process and all the work they put were well worth the effort. Although long-term bidding processes are a routine matter for Messe Frankfurt and the Frankfurt Convention Bureau, winning an international convention like the EBMT Annual Meeting is something special: “The successful acquisition and running of the 2019 EBMT Annual Meeting will pay off in terms of the reputation of Messe Frankfurt as a top venue for international scientific conventions,” emphasises Romina Gowin-Becker. “It’s a very important target group for our guest event business.”

Frankfurt also benefited from the event, confirms Jutta Heinrich: “The Annual Meeting generated indirect revenues of around 5 m euros from visitors’ expenditure on hotels, restaurants, transport, gifts and so on.” The next internationally renowned medical event is coming to Messe Frankfurt in June 2020: the annual congress of the European League Against Rheumatism (EULAR). The congress is one of Europe’s largest, with almost 15,000 delegates, which highlights once more how much medical (congress) expertise is available in Frankfurt.

More news in Management
This article...