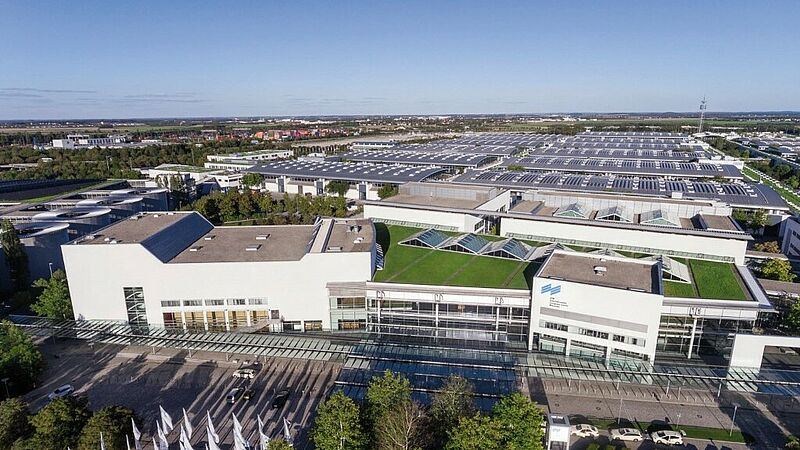 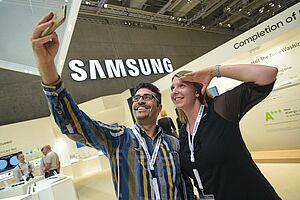 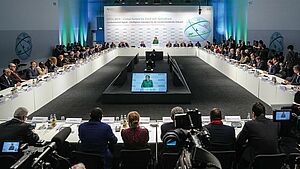 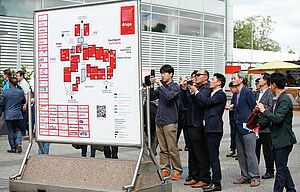 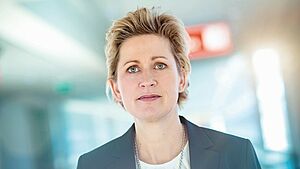 Location. “With leading international trade fairs occupancy and capacity utilisation with external customers is not always easy,” says Andrea Bisping, describing a challenge for her team. Since 2008 she has headed the ICM – International Congress Center Munich with 20 halls and 7,000 sqm of exhibition space. Together with Messe München and the MOC event centre, it operates as Messe München Locations. Every year, the ICM hosts around 80 events with over 100,000 guests.

In early April 2019, Bauma was once again the world champion in terms of space: With a total of 614,000 sqm, it occupies all of the exhibition centre’s halls, its entire outdoor area and parts of the ICM. Hall B0 was used for the new “Bauma Plus” format. The “Think Big!” event in the ICM’s foyer was dedicated to young talents. Large companies, universities and institutions gave students insights into tech professions and training paths. With interactive offerings and simulators, they demonstrated how construction machines work.

Bauma and the ICM celebrated a premiere with “Bauma Bavarian Nights”, that promised “Bavarian-style” networking. Exhibitors were able to book a contingent in room 14 of the ICM. After the end of the fair, their customers enjoyed some Oktoberfest-style fun. There was a real Oktoberfest band, dancers in Bavarian costumes, entertainers, beer benches and themed food offerings.

As head of ICM, Bisping focuses on inspiring and motivating potential guest organisers of major trade fairs “because they see what the ICM can do to support a fair.” By that she also means technology: “Some of our events demand a lot of expertise, especially in terms of network technology,” says Bisping. “Often we even set up redundant systems for sound, light, image transmission etc. Should the worst happen, we can supply the most important basic systems.”

Hub27 with capacities for 11,500 guests opened at Messe Berlin in mid-August (s. p. 33). Senior vice president Dr Ralf Kleinhenz singles out its versatility, as well as that of the CityCube: “Both buildings are seamlessly connected to the exhibition halls by covered passageways. Our leading trade fairs – ITB, International Green Week, IFA and InnoTrans – use the entire site, including the congress buildings,” explains Dr Kleinhenz: “This year, six of our own events contribute to our occupancy rate.”

The central challenge for leading trade fairs is the wide range of requirements that the buildings have to meet. For example, IFA used the CityCube as an exhibition hall for Samsung. At ITB it will serve for the opening ceremony: “The Global Forum for Food and Agriculture with with around 70 agriculture ministers there is part of IGW.” Berlin’s exhibition departments will adjust lighting, seating, catering and room layouts accordingly. The Guest Events Team is busy “identifying any free slots for other interested parties,” says a happy Kleinhenz.

Growing demand for tie-in events at trade fairs is also confirmed by Düsseldorf Congress (DC). From October, “the trade fair cycle enters into its most intensive phase again,” reports a spokeswoman. Leading international fairs such as K (plastics + rubber), Medica, Boot, Euroshop, Interpack and Drupa also fill the DC venues: “During these major events, all of the up to 100 rooms in the halls and congress centres are often fully booked.” In this respect, leading fairs provide a framework for innovative formats and highlights.

In addition to a considerable amount of communication, the spokeswoman mentions the challenges of overlapping customer needs in terms of time and space. Also the smooth operation of many co-inciding events. Managing the services and taking into account the cultural differences of an international clientele is a complex matter that requires empathy.

“Digitisation helps us with this,” she emphasises. The online order system meets exhibitor needs long before the fair starts. Room orders are being optimised and made more transparent. In addition, Düsseldorf Congress is renewing its internal workflow processes to make it easier for customers to plan trade fairs with digital tools. In order to answer the most important questions in advance and offer solutions, a website relaunch is underway. Active review management shall boost customer satisfaction and optimise services.

Hotel rooms are lacking, bemoans Joachim König, despite the world’s largest exhibition centre, “for gaining conventions of our own.” However, Hannover Congress Centrum benefits from the opening event of Hannover Messe, says its director. Once or twice a year, there are some individual events, usually banquet-style, during other major trade fairs.

Munich’s ICM looks forward to a series of annual general meetings after the Bauma excavators have left. Loyal clients include Munich Re with around 3,500 shareholders in April and the stock corporations BayWa and Wacker Chemie in May. As new additions, the ICM team has gained the AGMs of ProSiebenSat.1 Media and Knorr-Bremse as well as the Cardiovascular and Interventional Radiological Society of Europe for September 2020. ICM boasts a mix of new and regular customers: “Many companies have been using it since its opening over 20 years ago. We are well booked quite far in advance,” explains Bisping.

In September the centre will once again host “Bits & Pretzels”. Former US President Barack Obama will be the keynote speaker of the start-up festival. The Federal Association of Practising Veterinarians will follow suit from 17 to 19 October, and the Fujitsu Forum on 6 and 7 November. The good cooperation with the convention bureau and location partners is paying off, underlines Bisping.

Berlin, Cologne, Düsseldorf, Frankfurt, Hamburg, Munich and Stuttgart constitute the “Seven Centers of Germany”. According to Spokeswoman Bisping, the marketing cooperation of Germany‘s largest convention centres with adjacent exhibition centres supports the GCB. The goal is to market the “top meetings destination nationally and internationally.” The seven support the “Future Meeting Space” study. “It is very important for us to help shape the future of congresses, events and meetings,” emphasises the meetings expert.