Venues are demonstrating creativity and versatility, combining modern design with tradition or industrial chic with a Mediterranean ambience – for new event formats. 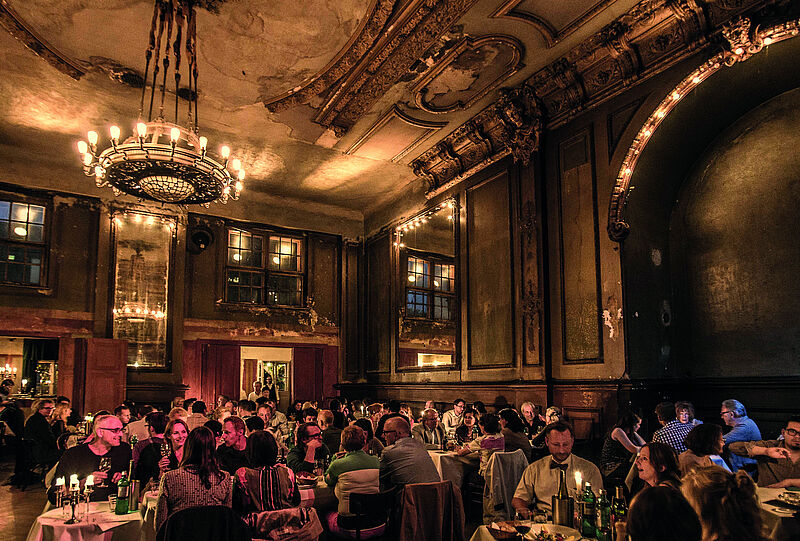 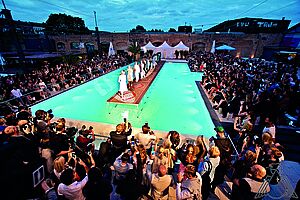 An experience. Germany’s capital city is an incubator of creative new business ideas and offers planners a no less creative selection of event venues. From versatile coworking spaces to typical meeting facilities and historic venues, Berlin has it all. There are fantastic new venues elsewhere as well.

Berlin has Frank Gehry to thank for the Axica conference centre by the Brandenburg Gate. Behind a sober facade, the interior design is something the star architect still looks back on with pride. Gehry recently flew in from Los Angeles to celebrate his 90th birthday there. At Axica’s core is the amorphous structure of the plenary hall, which holds 80 people. The partially oval glazed roof floods the space with natural light, right down to the lower floors. Cloud-like ceiling installations strengthen the impression of being at an open-air meeting. Five further rooms offer breakout spaces for 500 people.

The faded grandeur of Clärchens Ballhaus, a dance hall and restaurant in Berlin Mitte, forms a marked contrast to Gehry’s light, airy architecture. Built at the end of the 19th century, the building oozes period charm. The centrepiece is the Spiegelsaal (mirrored hall), with its stucco ceiling and wall reliefs. It can be hired exclusively or combined with the dance hall.

Cafe Moskau in East Berlin is also historically important. Built during the communist period and now listed, this prestigious building offers two floors and can be used as a multifunctional event venue. Any banners displayed on the building’s facade are guaranteed a high impact. Not far from this cult venue are both the former Kosmos cinema as well as Kino International, which is still running. Designed by Josef Kaiser, these venues are like living, breathing German history. Their architecture makes them suitable for a wide variety of event formats as well as a typical cinema-going experience.

East German charm, combined with modern furnishings and the latest equipment, can also be found at Haus Ungarn, a stone’s throw from Alexanderplatz. The GDR cultural centre was given a makeover after the transition from communist rule but has retained the style of the period. It offers spaces both large and small, which can be used individually or combined. The agency 24/7 Event is behind the well thought-out design: “Design is our hobby, our passion, and luckily it’s also part of our job.” Further boutique venues designed and managed by the agency are Spindler&Klatt and The Grand.

Mindspace founder Dan Zakai has learned that Berlin is the kind of creative hub that is ideal for his coworking concept. Zakei sees demand for venues that set themselves apart from conventional conference rooms with playful, modern design. Mindspace designs its venues around the world with unusual office and conference furnishings: vintage furniture, flea-market finds and paintings create a chic ambience. Mindspace offers space for events of almost any size and format.

An appreciation of aesthetics and an eye for detail are clearly evident at APTM (A Place To Meet) in the Berlin district of Wedding. The “living gallery”, as APTM founder Chris Glass calls it, is conceived as a flexible design loft, suitable for both dinner in an intimate atmosphere and large events for 200 people.

Haubentaucher, in the Friedrichshain district, offers 7,000 sqm of space in a number of different rooms as well as spacious outdoor areas. Planners can choose between an event hall with a bar, a ski hut or a tree house. Haubentacher’s heated swimming pool with sun deck is always in great demand with its mix of industrial charm and Mediterranean flair.

The Arena Berlin in Alt-Treptow offers a relaxed urban atmosphere. Built in 1927, the complex offers two event halls, a club, a bar and a bathing ship, which is essentially a floating swimming pool on the River Spree. If you don’t fancy a dip, you can sunbathe in the adjacent beach area and enjoy the view of Berlin’s skyline.

In Dresden, 180 minutes’ drive south of Berlin, a new event venue is opening in the summer of 2019 in the former slaughterhouse complex. The old walls, which are listed, are being restored and converted into the Ostra Studios. The highlight is the future Ostra Dome, shaped like a lotus flower, which will become a versatile event arena.

Vienna, Austria’s capital city, is known far beyond the country’s borders for its historic buildings and settings. Bespoke Events is presenting a traditional venue in a brand new guise: Meinl’s Rösthalle. In the winter months celebrations and meetings can be held here on a small or large scale. The operating company assures organisers that there will be snow.

Whether they are time-honoured, futuristic or hip – each of these places has its own history and offers planners a customisable space.