Frankfurt really pushed the boat out for its successful bids for EBMT and EULAR. How do the players work together? A look behind the scenes. 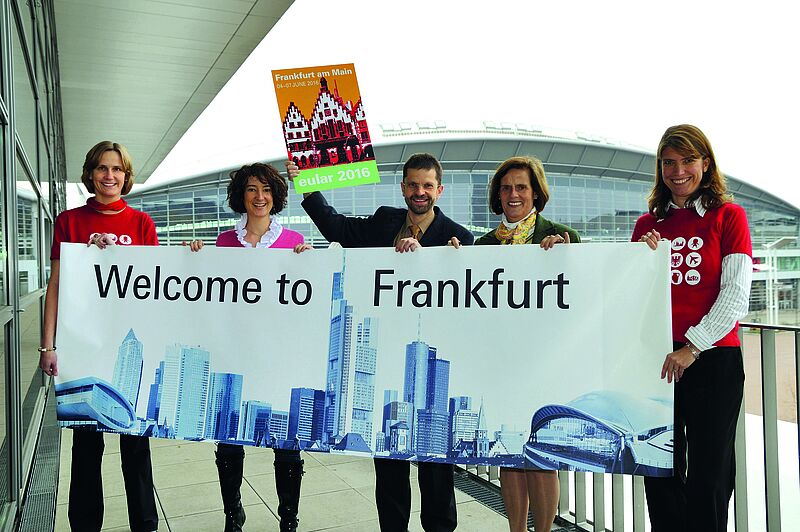 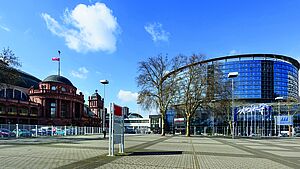 To the bone. “It’s the largest congress in Frankfurt since I joined. That means for over twenty years,” says Jutta Heinrich. The head of Frankfurt Convention Bureau (FCB), a department of Tourism & Congress Frankfurt (TCF), is delighted to have secured EULAR 2020, the European Congress of the European League Against Rheumatism. “Ten years after Roland Koch, then Prime Minister of Hesse, called our Managing Director Thomas Feda, EULAR is now coming to Frankfurt.

The whole thing was initiated by Prof. Dr. Ulf Müller-Ladner, President of the German Society for Rheumatology (DGRh). He teaches at Giessen University and has rheumatism patients in Bad Nauheim. In 2010, Prof. Dr. Müller-Ladner wrote a letter to Anke Koch, wife of the then First Lady of Hesse, and traditional patron of the German Rheumatism League. The letter and phone call brought the idea of securing the congress for Hessen to the heart of the city and the trade fair.

Müller-Ladner has been assisting the FCB team as a strategic advisor ever since: “He revealed that the then EULAR President was coming to a meeting and had the idea that we could pick him up from the airport,” Heinrich remembers and says with a chuckle: “So that‘s what Claudia Delius-Fisher, then head of the Congress Centre, and I did.” Heinrich is certain: “Without the persistence of Professor Müller-Ladner, we would not have won the congress, especially as the EULAR’s Board in Zurich was not so keen on Frankfurt at that time.”

But this only motivated the FCB team all the more: With a personal touch, detailed offers, intensive negotiations and thanks to the close cooperation with Frankfurt Messe, the banking hub won the event. The contract was awarded during the Amsterdam congress in June 2018, some seven years after the first presentation at EULAR’s headquarters in Switzerland.

This was preceded by some major milestones: 2010 saw the first strategy meeting of the Chamber of Commerce’ tourism working group, as a result of which the congress ambassador programme was developed, with Prof. Müller-Ladner as one of the first ambassadors. The EULAR Bid-Book was completed in early 2011 as an unsolicited bid, followed in the autumn of the same year by a joint presentation by Claudia Delius-Fisher and Jutta Heinrich in Zürich-Kilchberg. And in June 2020 it will really happen: Around 15,000 EULAR visitors will come to Messe Frankfurt 2020 to forge strategies against diseases of the musculoskeletal system.

Looking back, Heinrich singles out two of the biggest hurdles: firstly, having to convince the European HQ, and secondly nego­­tiating with the Frankfurt Hotel Alliance and the PCO, MCI Geneva. “On 4 December 2017, we sat together for three hours,” says Heinrich, “I moderated on behalf of TCF. And although we were not yet allowed to name the congress at the meeting, we were able to make a recommendation. It became clear to everyone that we had to pull together.”

The team comprising the city, Messe Frankfurt and science leaders is well-established. The congress of the EBMT, the European Society for Blood and Bone Marrow Transplantation (see case study in CIM 2/19) is also a result of this collaboration. The trustful close cooperation with, and untiring efforts of the Co-Congress Presidents Prof Peter Bader and Prof Thomas Klingebiel, then transplanted the 45th EBMT Congress to Frankfurt in March 2019.

“An international panel of experts discussed the possibilities of stem cell transplants and the treatment of graft-versus-host disease,” said Prof Klingebiel. Both professors, official congress ambassadors since 2014, are very concerned about “children’s issues”. They both strongly supported their integration into the programme – also in order to give paediatricians a greater platform and room to discuss.

Frankfurt proved that its heart beats just as strongly for scientific events several times over: the EBMT networking evening took place at Gesellschaftshaus Palmengarten, and the Frankfurt experts were happy to answer questions at the info desk on all days of the congress. And, since the way to somebody’s heart is through the stomach, the city supported the catering for the welcome reception and poster sessions. The TCF team also saw to it that all guests got a good night’s sleep, tirelessly managing the hotel bookings.

In addition, the Messe Frankfurt team as a full-service provider gave the EBMT a professional home with logistics, catering, signage, security and technology. For the pitch presentation, it elaborated, among other things, what the conference would look like. The fair- and congress experts: “Getting a scientific congress organiser to decide for a venue is a challenging task. The closer the city, venue and science sector work together, the more convincing the offer will be. This teamwork promotes a sense of unity and solidarity, which the client can feel and is probably our most important asset.”