Messe Stuttgart with new records in turnover and return 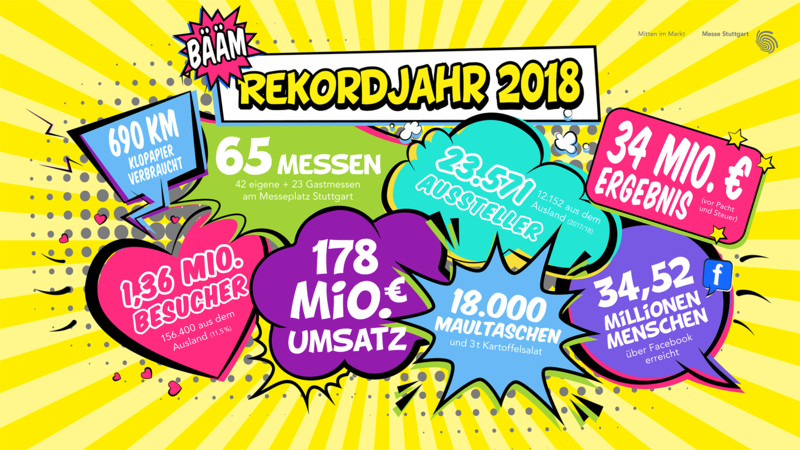 In 2018 Messe Stuttgart took off with an enlarged exhibition area: The new Hall 10 gained record results for the company in turnover and return. The company expects a turnover of 178 million Euro and earnings before leases and taxes of 34 million Euro, 20 percent more than in 2016.

These preliminary figures were announced by the presidents Ulrich Kromer von Baerle and Roland Bleinroth at the New Year’s press conference today (10 Jan 2019).

“The trade fair and conference business in Stuttgart continues to grow”, president Ulrich Kromer says. Even with 15 percent more exhibition area, Stuttgart is one of the best occupied trade fair venues in Europe. The new Paul Horn Hall was booked with 16 events in the first year.

Totally more than 1.36 million visitors and 23,571 exhibitors came to 65 trade fairs in Stuttgart 2018 – a record high. “Almost 30 percent of exhibitors and more than 10 percent of the visitors now come from abroad”, President Roland Bleinroth says –  “our engagement in 52 countries pays off”. Record figures were achieved at the travel exhibition CMT, the gastronomy trade fair INTERGASTRA/GELATISSIMO, the World’s leading trade fair for roller shutters, doors/gates and sun protection systems R+T, the meeting point for the metal working industry AMB and the logistics trade fair LogiMAT.

In 2018, Messe Stuttgart sharpened its profile in industrial solutions trade fairs: CastForge, a new trade fair for castings and forgings with processing, made it’s debut with 153 exhibitors from 18 nations, T4M, a new platform for medical technology will take place in May – after the end for the guest event MEDTEC at the location. And in October, IN.STAND, a new trade fair for maintenance and services, is launched.

The trade fairs TV TecStyle Visions, WETEC and GiveAdays which have already been held as guest events, have now been added to the portfolio of Messe Stuttgart’s own events. Also, for the first time, CMT hosted the Tourism & Caravanning (TC) trade fair at its Leipzig location with around 500 exhibitors and more than 60,000 visitors.

Another driving force is the business with guest events, congresses and events: Last year, event organisers booked the rooms of the ICS International Congress Center Stuttgart a total of 150 times. One focal point were medical congresses like the 28th Annual Conference of the German Senology Association with 2,600 participants.

Also with twelve successful events in China, Brazil and Turkey, attracting over 2,000 exhibitors and over 150,000 visitors, Messe Stuttgart International continued the positive development of the previous year in 2018.