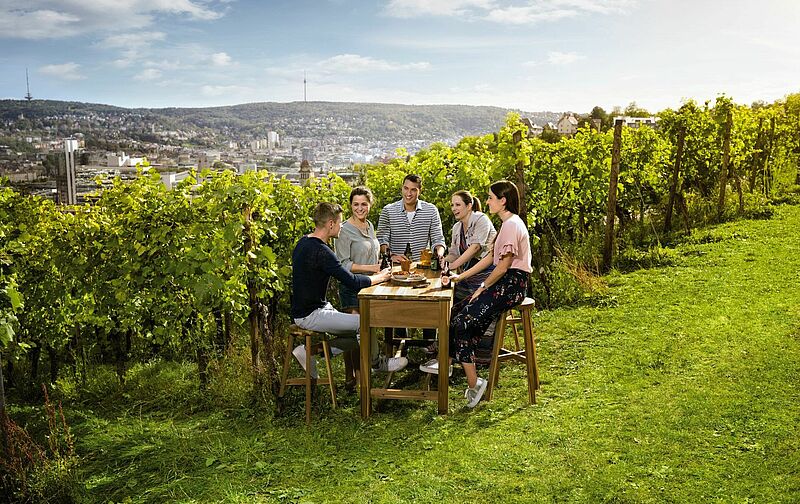 The people of Stuttgart certainly know how to enjoy the good things in life. While it used to be known as Germany’s chocolate capital, Stuttgart has now found acclaim even further afield as a wine-growing region.

Maultaschen (ravioli-like pasta), gaisburger marsch (beef stew) and lentils with spätzle noodles are just some of Stuttgart’s local specialities. Together with rostbraten (roast beef with onions), kartoffelsalat (potato salad), kässpätzle (cheese noodles) and ofenschlupfer (bread pudding) they are the most popular Swabian dishes. Some of these epitomise Swabian frugality in its tastiest form: The day's leftovers end up in the stockpot or rolled into pastry. The pretzel is the favourite local snack and can be enjoyed at any time of day - with or without butter. Legend has it that it was born out of despair: In the 15th century an unfortunate baker was given the chance to avoid the death penalty by creating a pastry through which the sun could shine three times. Swabian specialities are best enjoyed in traditional wine bars or the besenwirtschaften (pop-up taverns) run by wine growers. To show that they're open for business they simply hang a broom at the door. Only the vintners' own wines are served there, usually in the typical local glasses with a handle.

Even if it is rarely remembered today, in the early 20th century Stuttgart was known as Chocolate City. In 1912 Alfred Eugen Ritter and his wife Clara founded a chocolate and sweet factory in the Bad Cannstatt district of Stuttgart. Nearly 90 years ago the company relocated to larger premises in Waldenbuch, where it still has its headquarters today. It was also Clara Ritter who devised the square-shaped chocolate bar. She had the idea of producing a chocolate bar that would fit into the pocket of a sports jacket without breaking, yet weighed the same as a rectangular bar – that was the birth of the original name "Ritter's Sport Chocolate".

In Stuttgart you'll find not only good chocolate, but also excellent coffee. In the 1930s Gustav Hunzelmann brought coffee to Stuttgart, establishing his own Hochland coffee roastery at Königstraße 45. In addition to the Hochland Café and two Holanka Bars in Stuttgart, a Hochland chocolate shop was opened in 2010.

Beer or wine? The Stuttgart region is great for both. Founded by Carl Dinkelacker, the Dinkelacker family-run brewery has been making beer in Stuttgart for the past 130 years. In 1900 it was also the first brewery in Stuttgart to produce a type of beer brewed in the pilsner tradition, now known under the name of CD Pils. Some years previously Ernst Immanuel Wulle had established a brewery bearing his own name. It was taken over by Dinkelacker in 1971, and the iconic "Wulle" beer made its comeback on the market in 2008.

Wine is a theme that is inescapable in Stuttgart. The regional capital is the only major German city to own 17.5 hectares of municipal vineyards spread across six locations. The regional landscape is also dominated by vineyards, which look back on a long tradition. This is what attracted Georg Christian Kessler to settle in Esslingen in 1826, where he founded Germany's first sparkling wine factory – now the oldest in Germany.
If you would like to enjoy the regional wines in the comfort of your own home you will find a large selection at Feinkost Böhm, the Market Hall and Weinhandlung Kreis.

For more information and Swabian recipes to try at home please visit www.tastystuttgart.com